Stand Out with Craft Cannabis

Nuanced aromas and sophisticated flavor profiles may have once been the sole purview of fine wines and craft beers.

Not anymore. The emergence of craft, or boutique, cannabis is creating a new market for connoisseurs. The final product requires a greater investment of work and time than growing the usual cannabis strains, and it often yields slimmer profit margins for cultivators and dispensaries. But it does afford one major advantage: It sets apart the cultivators who grow it and the dispensaries that carry it, giving them a much-needed distinction.

Just ask Shane Yoakam, master breeder and cannabis grower with the Salem, Ore.-based Phenomenal Genotypes. “You’re going to open the jar and have that ‘wow’ factor,” Yoakam said. He added that in a market where many operations grow primarily for quantity, “craft cannabis stands out.”

He and his colleagues take their cue from the wine and craft beer industries. They point out that both are examples of how high-quality products can fetch competitive prices even in a saturated market. The same can be true for cannabis.

But what exactly is craft cannabis? Let’s start by examining what it’s not.

For starters, it’s not synonymous with top-shelf cannabis. Boutique cannabis is defined by nuances in four main areas: smell, flavor, experience and appearance. Most top-shelf cannabis, by contrast, exhibit unique qualities in only three of those areas, said Mike Cawley, owner and head farmer at Geek Farms, an Oregon-based wholesale producer that specializes in boutique cannabis. “To be able to really have a nuanced and unique way to differentiate that product from every other farm throughout the state, or throughout your market, is really key,” he added.

Other distinguishing qualities of craft cannabis include terpene profiles, potency, cannabinoid profiles and tolerance levels, or how many times a customer can consume it before building a tolerance. 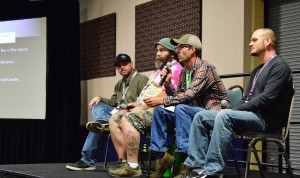 Producing craft cannabis means creating the right growing environment. And that starts at the roots. “Some of the best cannabis that we want to smoke comes from soil,” Yoakam said. That’s because cannabis buds, like wine grapes, are influenced by the soil they grow in. Cannabis grown in rocky soils will have a different profile than cannabis grown in wet soil. “You’re not going to get that with hydroponics,” he added.

Craft cannabis usually fetches about 10 to 15 percent higher prices than standard top-shelf bud. That’s because cultivating craft cannabis is a labor-intensive operation that requires higher production costs. To offset those increased expenses, cultivators will often find savings elsewhere, such as in nutrients or electrical costs. Geek Farms, for instance, mixes its own soil in-house, Cawley said.

Likewise, dispensaries that focus on selling boutique cannabis often go small, both in terms of staff sizes and square footage. A boutique dispensary usually runs at about 700 square feet, as opposed to the 2,500 square feet of a typical dispensary, he added.

However, adding craft cannabis to your menu or your grow can be worth the investment. Cawley has seen several dispensaries find success by taking a two-pronged approach: Shifting to small-batch offerings and trimming down their overhead costs to adjust to slimmer profit margins. In fact, he’s planning to use a similar model when Geek Farms opens two dispensary locations soon.

He won’t be alone. Dispensaries that offer craft cannabis have established a toehold in Oregon and other states. One of the reasons behind their success: Craft products offer not only quality, but also consistency, which is sometimes difficult to find. “In general, dispensaries have many strains on their shelves, and the qualities of each of those strains are inconsistent with each batch from the producer,” Yoakam said.

Will craft cannabis overtake the market, then, pushing out more mainstream strains? Not necessarily. There’s room enough in the industry for both. To make the point, Cawley harkened back again to the wine industry. “Not everyone is going to be breaking out Chianti every day,” he said. The same goes for cannabis.

For dispensaries in states that allow them to source cannabis from other grows, finding a reputable craft cultivator should be a top priority.

“Seek out the local producers and farms that have a reputation for producing clean, high-quality cannabis,” Yoakam said. Get a sample of the cultivator’s work, and look for clean, resinous and meticulously trimmed buds. Ask the cultivator about their methods, and don’t be afraid to ask what pesticides they may use. “A good craft producer always takes pride in their work,” he said.

You might have to do some digging to find these cultivators. A good place to start is on social media, which many craft producers use to broaden their reach. “Instagram and other forms of social media have been amazing tools for the small craft gardeners to reach out to clubs and wholesalers throughout the state, and create demand in others,” Cawley said.

If you’re looking to grow your own craft cannabis, your employees are one of the most important resources you have, he said. Their passion is vital to cultivating high-quality boutique buds.

Finally, don’t be afraid to get some dirt under your fingernails. “The best approach to craft cannabis is to really get involved with nurturing and caring for your flowers while growing and preparing product for the end market,” Yoakam said. “This mean getting your hands dirty building custom soils, brewing healthy microbe-rich compost teas, customizing feeding for specific cultivars, hand watering plants, and always hand trimming each flower to perfection.”