Professional growers have more access than ever to standardized testing procedures from cannabis laboratories. The test results allow growers to improve their methods of cultivation. This partnership between growers and labs is building a framework for the future of cannabis science. The more you know, the better you grow.

There are many cannabis labs in legal states, but the states regulate almost none of them. As a result, the types of tests vary from state to state and from one lab to the next. But some labs are furthering the science of understanding cannabis and standardizing testing models. 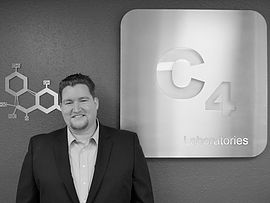 One example is C4 Laboratories of Mesa, Ariz., founded in 2014. C4 founder and CEO Ryan Treacy assembled a team of multidisciplinary scientists, doctors and passionate cannabis professionals to help standardize the testing system and create a model to study cannabis and its unknown properties for medical benefit. Treacy said that one of his purposes was to bring “some regulatory vibe to Arizona, being that the state has not mandated full safety testing.”

The goal of C4 (which stands for “Compassion-Centered Cannabis Care”) is to bring a standard of quality to those who use the lab’s services. “By design, the intention when we started was compassion for the patients,” Treacy said. “We are working with the system in place to help create a more stable and comprehensive system for all medical patients.”

New treatments and compounds
Most labs test only for the big three cannabis properties: THC, CBD and CBN. But C4 is experimenting with ways to help patients who need individually targeted treatment needs, in addition to testing cannabis for unknown uses and new compounds. The lab scans for 10 primary forms of cannabinoids (such as THCB) and lesser-found terpenes. Already in the last eight months, C4 has discovered three previously unknown terpenes and two cannabinoids.

The team of Dr. Zacariah Hildenbrand, Dr. Kevin Schug and Aaron Hicks offers a wide variety of skill sets that will help understand and legitimize cannabis, which “should have been legitimized years ago,” Treacy said. As C4’s Chief Scientific Officer, Dr. Hildenbrand is focused on educating the public about the scientific merits of cannabis, as well as developing innovative cannabis-based therapies.

There’s therapeutic value in the properties they’ve found, but knowing which are the most beneficial will take further study. The problem is that each plant produces small quantities of them. However, the benefits discovered in CBD led professional growers to bring its properties out stronger. Over time with genetic strengthening and proper breeding techniques, C4 hopes that the same will hold true for these newly found, useful properties.

Treacy said, “Just as we did with THC and CBD, we can do with some of the lower-concentrated cannabinoids and continue to do with new cannabinoids and terpenes that are being discovered. The more we know about all of the properties contained within the plant, the more we are aware of how much, how far and how well we can treat a variety of ailments. The sky is the limit; we are excited to be at the forefront of this field.”

C4 is a member of the Association of Commercial Cannabis Laboratories, a group of independent labs across the country that work in conjunction to solidify and standardize the testing procedures and practices. Each ACCL member follows the same strict standards and practices.

But working together with the cannabis industry will take time. “Collaboration is essential right now,” Treacy said. “There are a lot of people with a lot of great things that should be expressed for the greater good of the industry. We need to stop hiding the information we have and collaborate to make a better industry across the nation.”