If you spend any amount of time with professional cannabis growers and processors, you’ll start hearing about sample testing. For example, “These buds tested at 20 percent THC.” Or “These buds have a rich terpenes profile.” Or “This edible contains no pesticides.”

In some states, growers and processors must submit sample batches for testing before offering products for sale. Unfortunately, there’s a lot of misunderstanding when it comes to testing cannabis products. Many people think a chemist will just take a bud and drop it in an instrument that quickly analyzes the bud and prints out the results. But that’s not really how sample testing works; it’s way more scientific.

Perhaps the most popular method for testing cannabis is high-performance liquid chromatography, or HPLC. This is a method of testing product that falls under the umbrella of “analytical” chemistry. Analytical chemists are concerned with one thing only: “How much stuff is inside this other stuff?”

Which brings us back to HPLC. Chromatography, which is the basis of the system, literally means “to write with colors.” This is because the earliest chromatography techniques separated liquid components on paper, and the different colors that were produced told us what chemicals were in the liquid.

Imagine chromatography like ink from a fountain pen being dropped on a coffee filter. Dip one edge of the filter in water and let the water run up the paper. What happens? The water separates the ink along the filter. You’ll get bands of green, brown, blue, etc. That’s chromatography at its most basic. And that concept forms the basis of HPLC.

An HPLC is an instrument that combines technology, software and technical know-how to determine how many molecules of a substance are in another substance. Chemists use this technique for all sorts of things, from testing our food, to seeing what’s in our beauty products, and even for finding contaminants in water.

In layman’s terms, how does HPLC work? First, let’s use 1 gram of bud. The chemists take the bud, grind it up into a fine powder, then mix the dust in with a solution of liquids. (It’s usually some mixture of methanol and acetone.) They stir this mixture.

Next, they separate all the solid matter from the liquids. There are a few ways to do this, but one common method is to draw up the liquid through a filtered syringe. If they do it right, this liquid contains pretty much all of the cannabinoids, terpenes, chlorophylls and other substances that were once packed into our bud.

The third step is transferring the liquid to the HPLC instrument. The liquid goes in a special vial made just for the HPLC. Once it’s inside the instrument, the chemists press “Start” and the machine does the rest.

The fourth step involves measurement. The HPLC sucks up the liquid then injects it through a “column,” which is made from a special material that’s designed to stick to whatever the chemists are looking for. Certain columns are best for trapping cannabinoids, others for terpenes, and some columns can even trap both. To make the molecules move across the column, the instrument forces it along with pressure.

Every molecule has a unique shape, size, weight and electrical charge. Think of the molecules inside the column as two kids wading through the plastic ball pit at Chuck E. Cheese’s. One kid is small and the other is much larger. They move from one side of the ball pit to the other at the same time. The smaller kid moves faster than the larger kid and reaches the other side first. Why? Because he experiences less resistance from those plastic balls. The larger kid, by being bigger, has to wade through more stuff to get to the other end.

So, that’s pretty much how the column works. Smaller molecules move across the column faster than larger molecules. If we know which molecules we’re looking for (THC, CBD, etc.), then we know how long it takes them to get to the other end of the column.

But how do we know which molecules are moving where? After all, these things are too small to see with the naked eye. Well, that part is handled by the HPLC’s detector. The detector shoots light through the column, and every molecule absorbs certain frequencies of light. So if we know what we’re looking for, we can set the HPLC to pick up on those frequencies. The HPLC tells us not only when those molecules pass through the detector but also how many of those molecules passed through it.

Next, the instrument’s software calculates how much of our molecules were in the sample. It’ll print out a graph, called a “chromatogram,” that tells us at what time the detector picked up a particular signal. Using some calculations, we can determine just how much THC, CBD, limonene or whatever was in our 1g sample of bud. 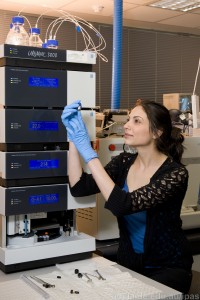 Issues with the HPLC

But as any chemist will tell you, no analytical method for sample testing is perfect. Every technique has its flaws, and the HPLC is no different.

Because of these reasons, it’s a good idea to send more than one sample to a lab. Also, send samples to as many different labs as you can, and compare the results.

Next time, we’ll talk about gas chromatography for sample testing.

Cannabis Cultivation Today articles are for informational purposes only and should not be considered legal guidance or advice on grow practices. You should contact an attorney or a qualified cultivation consultant for specific compliance and cultivation advice.